Both of my parents immigrated to the United States from Europe when they were teenagers knowing very little English, but made their way through school and eventually the work force.

My toddler self grew up speaking our home language (to date my grandparents speak barely a lick of English). Of course I went to school in mainstream education, where English was the primary language and I learned, played, and communicated with classmates and teachers with no real issues. But then… I had to pass this test before “graduating” kindergarten.

I actually have this vivid memory of sitting at a table across from my sweet Kindergarten teacher with her classic 1980’s perm, and staring at a picture of a cartoon man with an arrow pointing to his neck. She asked “What’s this part of your body called?” I knew what it was, obviously! But I just couldn’t think of the word in English.

I sat there… I waited for it to come to me… no luck. Then finally, just said the word in my parents’ native tongue. Mrs. Perm asked me to repeat it. I froze. I said nothing more. Sadly, after the neck incident, there were more pictures that I couldn’t recall the names of in English.

My mom tells me that the teacher called her, concerned and a bit surprised. My caring mother, who was fluent English, explained that we spoke another language at home, and essentially begged her to graduate me (thanks, Mom!). And… from that moment on… we spoke English at home.

Looking back, it was a total tragedy. The education system really had no knowledge of multilingual, multicultural backgrounds of its students. And sadly, there are still plenty of myths out there about the bilingual brain. How many families has this happened to? How many parents just wanted the best for the children and just stopped speaking their home language? How are parents supposed to know this stuff? Of course we want our children to succeed academically, so what would you have done if you were in my mom’s shoes?!?

Luckily, the number of bilingual homes in the United States has grown in the last 20 years, and there has been more research, more information, and more overall acceptance of bilingualism. BUT — there are still some naysayers out there. Time to set the record straight.

No way! Your baby is doing the complex task of language separation, and doing it quite easily. Studies show that babies as young as 7 months can differentiate between two different languages. Those brilliant brains use clues like listening to the pitch and duration of each language to compartmentalize which system they’re hearing. Amazing!

Wrong again. Your toddler is actually exercising a form of linguistic genius. Research has proved that mixing languages is actually a normal process for bilingual language acquisition. In fact, if you’re bilingual, you probably do the same thing. Have you ever switched languages mid-story or even mid-sentence when chatting with someone who shares your two languages? It’s called code-switching, or code-mixing, and it’s a common practice for bilingual speakers. The experts agree that the early talkers are code-switching to help with their competence of overall communication. How savvy.

Here’s the thing. If a child has the ability to learn one language, they have the ability to learn to two. Or three. Or more! There’s no proof out there to say that there are too many languages for a child to be exposed to. Research has looked at multilingual language development for children with intellectual disabilities, and found that they learn language in the same ways.

It’s never too late! Or too early. Some studies suggest that if a child is exposed to a new language before 7, then they can gain full fluency in that language. After age 7, there are just more variables in proficiency of the new language, which depend mostly on the level of exposure that they have. Our brains are always up for learning something new, so even YOU have the ability to learn a new language if you immerse yourself in it.

Come on. You knew that one was a total myth. You may have already heard that being bilingual may slow the effects of aging. Fountain of youth, here I come. Babies that are exposed to more than one language have also been shown to demonstrate more cognitive flexibility and enhanced executive function than their monolingual counterparts early on (not to say that monolinguals can’t reach high levels of executive functioning, just suggesting that it’s happening sooner in bilinguals). In addition to some of the cognitive advantages, there are social-emotional benefits to be being bilingual, such as having more self-control (though somehow this doesn’t apply to me when seconds on dessert is offered).

Just remember, the bilingual brain can’t be viewed as just two monolingual language systems, but instead think of it as a unique and complex system that is different in each case. At the end of the day, if you’re talking to your baby in a language that you’re comfortable in, you’re helping their brain grow. 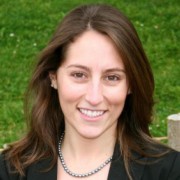 Erika Cardamone is a speech-language pathologist, Mom, and founder of Baby School, a course that teaches parents how to play with their babies. In her free time, she’s searching for umami in her local eateries, building forts and having dance parties with her toddler and husband in their small city apartment. If you want to know what she’s thinking, she’ll tell you at her blog over at TheSpeechies.com.

How to raise a bilingual child