What a difference a year can make in the life of a brand-new human being. It can mean making the leap from breast milk to chicken dinners with a fork, or from immobility to running free. With that in mind, think what a difference two or even three years can make. Two years ago, as she was approaching her second birthday, my daughter June didn’t ask detailed questions from the second she opened her eyes in the morning until she closed them at night (like she does now). She was mostly just naming stuff and babbling about. And about two years before that, she couldn’t even say words. She just cried and grunted.

But now, as she quickly approaches her fourth birthday, she begins each day — before even saying “Hi” — with a specific question or two like, “Why did the Grinch turn good?” “Are there dentists in New York City?” “Do pigs have teeth?” “Who will be the dad for my kids?” You can imagine that by the end of the day, “humoring” doesn’t even begin to explain my survival strategy. After twelve hours of rapid-fire questions from a preschooler, a parent can get to reminiscing about a simpler, quieter, less mind-bending time.

Although I miss the quiet of June’s newborn stage at times, I don’t miss the silence. Between her little noises and cries, there was pretty much…nothing. If I asked her a question, she couldn’t offer much in return. I realize now how much I felt a distinct lack of conversation and a deep desire for her to talk back to me.

In all honesty, it’s hard to be alone with a newborn for extended periods of time. It can throw people — especially first-timers — for a loop. I know it did for me. It’s understandably boring for us adults to maintain what we often perceive is a one-sided “conversation.” But at the same time, it’s critical that parents and caregivers put forth the effort because it is actually not one-sided at all. Age zero to three is the window within which you hold the power to set your child’s language and emotional development on the right trajectory.

The newborn brain soaks up your every word, song, utterance, story and coo. Talking to babies boosts their brain development and memory skills. In fact, an astounding 83% of brain growth happens before the age of three, which explains why June’s thoughts and sentences started gaining some serious steam around her third birthday.

Nowadays, I take for granted the fact that I don’t have to come up with any “conversation starters” for June. She’s got that covered, as do many preschoolers. But when it comes to newborns and babies, how can we overcome the glaring obstacle (of literally getting no response) and give them what they need?

Having a system in place can help cut through the long, silent minutes and hours, and it will give you some structure to make sure you cover this crucial aspect of parenting. Here are three easy steps to work in more words, more often:

1. Narrate
Simply describe what you are doing at the moment. You may as well get really good at this now because this is a parenting skill that comes in handy for all ages and for a variety of reasons. (Today I used it as a distraction tactic.) Narration is probably the simplest, easiest way for even tired parents to talk to their newborns. “We’re filling up your tub with some nice warm water.” “I’m cooking dinner, June! See how I peel the carrots?” “Look at all these different kinds of cereal! Which one should we buy?”

2. Imitate
Imitating your baby’s sounds and expressions is like a game that can subconsciously show your baby that you acknowledge and validate his or her needs. It sends the message: I see you, I hear you, and you matter. It also pads your word “bank account” for the day. Sneak in a bunch of words and fun facial expressions while mirroring your newborn during their feeding or meal time.

3. Book Club for Two
A free trip to the library will go infinitely farther for your child’s future than even thousands of dollars spent on tutoring or special school tuitions. Make it a weekly tradition; talk about why and where you are going while on the way. Describe for your baby everything you see along the sidewalk or road. Fill up a basket and then when you get home, read. Read again, and again, every day. Then read some more. Fun character voices and a follow-up? Bonus points. They don’t even have to be picture books, although bright colors and pictures will stimulate their attention — they would also benefit from you reading your favorite memoir or sci-fi out loud!

For your newborn or young baby, there is no substitute for your voice and your words. They are as nourishing and beneficial as the nutrients in their milk. I once had a friend pass on some powerful advice she had received: “Even though our kids are a part of our world; for them, we are their whole world.” We are it. It’s powerful, exhilarating, and hey—you should go tell your baby about it! 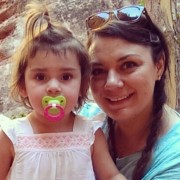 Meagan Lawrence is a freelance writer and Utah native. You can find her enjoying the deserts, mountains, snow and bright night skies of the West with her four-year-old "mini-me" daughter, June. They both hate wearing shoes, eating green peppers and being rushed. When indoors, Meagan writes about kids and babies, single parenthood, business and technology.

When should I start reading to my baby?