Learn more about how our Starling Library Partners are using the Starling to boost story times, build community and more!

A “Great Fit” for PECPL’s Families

When Whitney Shantz, Youth Services Librarian at the Prince Edward County Public Library (PECPL), first found out about the Starling in the School Library Journal, she was eager to see how the device could be incorporated into her weekly “Toddler Time” sessions with patrons.  During Toddler Time, families bring their little ones to the library for story time, and Whitney teaches parents reading strategies and discusses parenting tips. Whitney says, “Our parent community is very education focused, and want to make sure they are doing all the right things to prepare their kids for kindergarten. So it seemed like a great fit.” And right she was — the Starling has generated an amazing buzz since it was introduced to the library, and resulted in promising conversations on how to further advance the library’s early literacy efforts.

“I think the concepts about the importance of early talking is still fairly new with a lot of our parents, so it’s generated a lot of good conversation in our community during sessions. That’s been especially cool, because it can be hard to get parents talking to each other during programming”, says Whitney.

Whitney wearing one of her library’s devices

How is PECPL Using the Starling?

During Toddler Time each week, the group uses the Starling to see how many words their little ones are getting from the books they read together. A different child is given the honor of wearing the Starling each week, and seeing the data helps reinforce the message to parents about how important healthy reading habits are for building their babies’ brains.

And soon, the library will be circulating Starlings and allowing parents to take them home and learn what their baseline word scores are. Whitney says, “Our parents are really excited about this. They want to figure out where they’re at, and start learning strategies to improve. Some are especially curious about how many words their children are getting at daycare versus at home.” One family that attends Toddler Time home-schools their children, and they’re interested in incorporating the Starling data into their curriculum to make sure their little ones are getting enough verbal nutrition each day.

Whitney and the Prince Edward County Public Library won our Library Social Media Challenge this past month! They’ve received one of our Starling for Library Packs, pictured above. Thanks to participation from her community, they will be receiving a free Starling Library Pack for circulation. Congratulations to PEC, and look out for more chances to win Starling prizes! 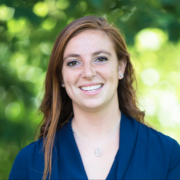 Marissa is part of the Starling Research Team, a Claremont McKenna College graduate and a proud California native. Her job is to provide VersaMe followers with useful, and sometimes surprising, information about early childhood education. You can follow her work on all our social media profiles, and here on the blog! In her free time she loves to cook and ride her bike.